Good morning.
A friend of mine challenged me to do a sermon while cooking,
so I accept the challenge.
Today we’re having fish for breakfast.

And why not? Jesus did.
John, who always tells the best stories,
tells us how it happened.

It’s a few weeks after that first Easter;
Jesus has appeared to his beloved several times,
but still they don’t know what to do.
They’re scared, anxious, confused,
believing one day, doubting the next,
afraid to go out in public,
isolating at home.

Until Peter can’t take it anymore.

I imagine him sitting in a window,
looking out on the street below,
maybe a little depressed.
What is he going to do now?
They left everything they knew
and followed Jesus.
What does he have to go back to?

Maybe he thinks back to the first day he met Jesus:
they’d fished all night,
which was the best time to fish the Sea of Galilee,
and had nothing to show for it.
They were tired,
they just wanted to clean the nets and go home.

But up walks Jesus,
fresh as a daisy after a good night’s sleep,
and he’s fired up like a preacher,
and he needs a pulpit.

So he gets in with Simon Peter,
tells him to put out a way,
and preaches to the crowd on the beach.
Then he told Peter,
let’s go back out and catch some fish.
Dumb idea, wrong time of day,
but, hey, it’s Jesus,
easier to humor him than argue with him,
so Simon does it.

And they haul in the second biggest catch of Peter’s life.

Which is too much for Peter,
who falls on his knees,
and begs, not to follow Jesus,
but for Jesus to go away and leave him alone.
He doesn’t need this disruption in his life,
and he screams one of the best prayers of the bible:
Go away from me, Lord, for I am a sinful man!

Never one to take no for an answer, Jesus just says,
Do not be afraid; from now on you will be catching people.

Found this lovely fish yesterday,
so we’re going to
put a few more scores in the side,
take this paste of turmeric, garlic, crushed cilantro stems,
some white pepper, a little onion powder, some dried basil leaves,
and just enough olive oil to hold it together,
rub it over both sides,
toss a little fresh thyme inside on top of some sliced limes,
and stick it in the oven.

Back in a sec.

So,
Simon Peter, sitting in that window,
life disrupted once again,
pensive on a sea breeze,
out of the blue announces,
I’m going fishing,
grabs his gear, and heads for the door.

What else can he do?
Fishing is all he knows,
the sea has always been his solitude.

Four or five other disciples chime in,
Wait—I’ll go.
Me too.
I’m in.
Just let me grab some sunscreen.

And they do it—they just go fishing.
And they fail;
they don’t catch a thing—nothing.

Just after daybreak,
the worst thing that can happen to a luckless angler, happens.
There’s this guy on the shore,
asking if they’ve caught anything;
and worse yet,
he starts offering advice.
Throw the net on the right side, he says;
right or left, what’s the difference?
But easier to humor him.

And they haul in the biggest catch of Simon Peter’s life.

Impetuous Peter drops everything,
jumps in the sea,
leaves all the work to the others,
and swims to Jesus.

He’s not going to let him get away this time.
He wants answers,
he wants promises,
he wants Jesus.

Jesus, who always did like a good meal,
has a fire going,
and probably like he used to do, says,
“You guys sit back; I’ll cook this morning.”

But for Peter,
it’s the hardest meal he’s ever had to swallow.
The man he denied three times is feeding him.

And in that quiet moment,
when everybody else pushes back from the table,
satisfied and satiated,
Jesus turns to Peter and says,
Simon, son of John, do you love me more than these?

Does he even look up,
when he answers,
Yes, Lord; you know that I love you.
Feed my sheep, Jesus says.

A second time Jesus asks, Do you love me.
Yes, Lord! Just drop it.
Tend my sheep, Jesus says.

A third time:
Do you love me?

How can there not be tears in his eyes
when Peter stammers,
Lord, you know everything; you know that I love you.

I love that that the resurrected Christ
keeps hunting down these hapless, discouraged disciples
and feeds them.
And sends them.

I think that all too often,
maybe especially these days,
we think our mission is to hold worship services for ourselves;
it’s not.

Worship feeds us,
we are hungry for it,
we long for each other
and to taste again God with us, God for us.

But worship is not our mission.

That’s why we spend very little time at it;
an hour or so,
and then we kick everybody out:
Go in peace, serve the Lord, remember the poor, share the good news.

The resurrected Christ sends us out into the world,
where we spend most of our lives,
to love and serve our neighbor—
what James calls, religion, pure and undefiled (James 1:27).

And that’s our mission:
Feed my sheep.

Be a blessing to the poor
(and a thorn in side of the rich and the powerful).

Learn patience and grace with the faults of others,
and the failures of your own.

Make kindness a way of life.

And if ever you get the chance,
preach the good news
of the God who longs to feed us
as much as we long to be fed.

Fish for people
(remembering they are not trophies,
they are God’s beloved).

Here we go,
take a look at that.
Ummm!
Smells so good.
We’re going to serve that with a little coconut rice,
something green and fresh,
maybe some fruit.

This isn’t going to get me a cooking show,
but it’s going to be delicious. 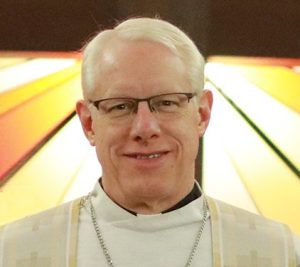